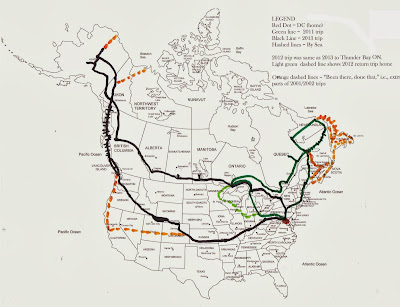 Our long journey to the ends of the road in the northeast and northwest has just come to an end. We set out in 2011 to do the entire trip, but heading west after reaching the end of the road in Labrador, we had to return home at Thunder Bay (Ontario) because of problems that were best dealt with a home. After a late start in resuming the trip in 2012, we again had to return home at Thunder Bay after Leben became paralyzed.   Fortunately, on this trip, we made it far past Thunder Bay all the way to the Arctic in Alaska, our goal.  Over the three trips,* we were on the road camping out for 123 days and traveled 24,800 miles, just 101 miles less than the circumference of the earth.

Moving on just about every day, first we traveled to the Atlantic and from there to the end of the road in the northeast in Labrador. Then, after a respite, we traveled north-westward to the Alaskan Arctic towards the end of the road there, with the Pacific thrown in as a side trip. Every night we camped in tents, four in all, except where circumstances or whim prevented us from doing so, and then we slept on the open deck of a ship in a storm, in ferries, yurts, primitive cabins, in the Defender, and, once, in a fifth wheeler set in an ecological wonderland on Vancouver Island that might as well have been the Four Seasons. Where we tented, we were, with a few exceptions, the only tenters. (Where did all the tenters go?) We camped and slept amidst brown bears and black bears, wolves and lynx, cougars and coyotes, moose and caribou, and other creatures too numerous to mention and too elusive to see. Except for a band of raccoons in Ontario, they all did what they were supposed to do, and so did we, so we all stayed safe. For many nights, we were alone in the camps, alone, that is, among humans. We were often lulled to sleep by the plaintive cry of a loon, the howling of wolves, the strange, haunting voices of nocturnal creatures, the nearby streams, rivers and oceans, the wind whipping and the rain pelting the canopy of our tent.

We saw sunsets and sunrises from almost six score different settings: mountains, valleys, oceans, lakes, rivers, streams, and plains. We slept under skies almost white from the presence of millions, billions, of stars, amber from the full moons in cloudless nights, or green and red from the Northern Lights. We camped in rain, snow, fog, freezing cold and never once asked, Why am I doing this? I knew the answer.

Mostly, we traveled the long, wide open and often empty northern North American highways and byways; dirt roads and gravel roads that were more pothole than road, with some that would pass for rain-filled sinkholes or industrial washboards; and trails and other conveyances that defy any definition of what most people would dare drive on. To say that some of the roads were treacherous would by an understatement.

Except for the obvious daily chores, only twice did I leave Leben and Erde to do something on my own for a short while. After all, the joy for them on the trip was to be with me, or so I hope, and the joy for me was to be with them.

Every day, we started the day's long drive to the voice of Pete Seeger singing This Land is Your Land, and sang the local version along with him while actually seeing the words come alive before our very eyes. Each day began with a rendition of Reveille and ended with Taps, just to reinforce the discipline we needed for this trip, and, boy, it took discipline and much more.

We saw incredible flora and fauna most people will never see or even imagine except through my stories. The vistas we saw almost daily, changing every few minutes as we navigated the road, most often elicited from me a spontaneous "Oh My God." Denali, the crown jewel of North American mountains, was gracious enough to reveal herself for the days we were there to admire her. The landscape surrounding her was nothing short of a radiant blanket of autumn colors I had no idea existed.

Leben and Erde, who were treated to three or four new scene changes a day, discovered smells of other creatures they never imagined existed. Now, the creatures they imagine who left those smells will be forever in their dreams. 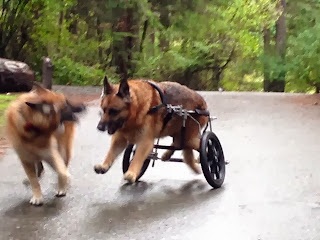 We visited sites that we camped in on our previous journeys when Leben and Erde were just pups, but mostly we discovered new ones. We hiked to my old Boy Scout camp in New York, now a forest preserve devoid of all human activity, except for the few hardy souls like us who make the hike each summer. If there is one place where my bonding with nature fused, that camp was it.


Before and during the trip, I listed the possible reasons I am making it, as if it was possible to be precise about this. I put my pen down at number 35.  Three reasons in particular trump all the others on the list: because I can, because I made the decision to do it, and because I need to get out of my comfort zone for a while.

Whatever the reasons or purposes for the trip were, we accomplished everything that I had set out to do, but we really only had one goal, to return home safely, and we accomplished that as of this very moment.

The demands of the day on the road left me little time to write or think (and virtually no time to read or plan beyond the next campsite), but I did have some time to think when driving. If I thought of one theme more than others it was this. Facilitated by the goldmine of music loaded onto my tablet, my mind skittered among many of  the significant people, places and events in my past that made me who I am today, and that was a rare but quite rewarding opportunity. And, of course, I thought of Leben and Erde's predecessors, Montag, Sonntag and Kessie, who added much value to my life and who were with us on this journey in my heart.

Not once on the trip did I feel bored, or, with one exception, tired. How could I with what I was experiencing? Instead of producing fatigue, the trip invigorated me. I lost about 25 pounds, but gained it back in soul. Leben and Erde took on a new vigor themselves, but I fear they will lose it when their lives become normal again.

The Defender proved for the sixth time that there is no better vehicle suited for this kind of trip. It had just one job for this journey, to get us safely home, and it accomplished it superbly. If it has a soul, I hope it can forgive me for what I just put it through, just as I forgave it long ago for its Sherman-tank like ride and, mostly recently, for its heater, which several times stopped working just when we needed it the most. As for its tires, which took the brunt of the punishment, I'd say, Even God cannot sink those industrial-strength Mud-Terrains, but I don't dare. Look what happened to the Titanic. (Ironically, it was 20 years ago this very weekend that I learned about the Defender, and bought mine shortly after that. Smart decision.)

Most important of all, we met many incredibly good, kind and interesting people, and lots of dogs, too, especially a 15-year old Greyhound named Frankie on a 4,000 bike journey with his guardians, Gigi and Adrian, and a beautiful 14-year old German shepherd named Kyra who, with her guardian, Nicholas, were the only ones I met who could truly relate to what Leben and I are going through.

Every day brought a new highlight for the trip. One, though, meeting Kyra and Nicholas, stands out among all the rest. How wonderful it was for us to meet kindred spirits on this journey, and in a place called Cathedral Grove at that. 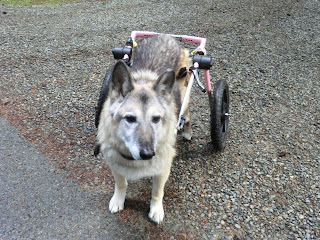 By far, the highlight of this trip: KYRA

There were no low points on this journey, but it did turn out to be far more difficult and challenging than my previous trips, which  I expected.  However, I also knew, as I have learned many times, that the greater the challenge, the more rewarding the experience. And we certainly had our share of problems, but we were ready for all of them: we solved them, figured out how to avoid them again, and moved on.

I had no time on these trips to record my reflections of what I was experiencing, or what Leben and Erde experienced, except the day's events, miles and fabulous camps, but I will do so in the coming weeks as I tend to other urgent matters waiting for me here at home. What I have to say about this journey, quantitatively and qualitatively, could fill a book.

If I wrote here the names or my recollections of the people on the road, at home, or elsewhere who helped or offered to help me accomplish this surely-unprecedented trip, I would surely inadvertently omit many, so I will not even attempt to, thanking them all anonymously. Many know who they are, but some do not. I also must thank the hundreds of people we met along the way who made heartwarming comments about my managing Leben, comments about both Leben and Erde, and comments about my "rig." (The comment by Tommy Noriss stands out the most:  "This is better than Denali," he said, when he saw Leben in his wheel-chair on the Denali Park Road. Wow. That's saying a lot.) Of course, I have to thank here my two loyal dogs, Leben and Erde, for being such incredible travel companions and providing hours of entertainment and sheer joy on this our fifth road-camping trip together. For most of the time during all the months we were on the road, they were no more than two feet away from me, mostly sleeping, of course. How fortunate I am to have had these two loyal creatures for almost 13 years now. How fortunate I am to have had the opportunity and ability to make this journey with them or at all.

The first thing I did when I pulled into my driveway a few minutes ago was to hug Leben and Erde, say, "We made it, guys", thank them, and then give them each a Frosty Paws.  It made their day.

well done, ed. what a wonderful trip it must have been.
best wishes to all,
roel

Thought of you guys many times while you were away. Welcome home and BRAVO to all. I can not wait to hear the details. Call when you are settled. Tedd