New Tent for the road

Over the last 21 years, I probably bought 8 or 9 new tents.  On these trips, I always take along at least two of them, sometimes three, just in case.  Things happen to tents on these trips that may make them useless.  For instance, in Alaska in 1992, a bear destroyed my tent as he (or she) went ambling thought my campsite.  Fortunately, I was in a cookhouse about 30 feet away when this happened.

Last year I bought a new four-person (or one person, two-big-dog), three-season that worked out extremely well except in high winds (impossible to put up) or in the real cold weather like we had in northern Ontario in October.  I also brought along my two-person, extreme North Face expedition tent, which worked well during the several times we had extreme weather, although things were a bit snug in there with Leben and Erde (they would say "with Ed.")  Because of Leben's situation this year, and because of the chances of more extreme weather this year, I just bought a new North Face VE25 three-person, four-season tent to take along this year.  (See photos and diagram below.)  We'll have a little more room than in the two-person tent, but will have to sacrifice ease of setting it up for that extra comfort. I will not be able to stand up in it as I can the 4-person tent, but who wants to stand up for long in a tent anyway? Likewise, we will not be able to use our big, 8" thick air mattress in it, but I will probably not take that along anyway because it will be too difficult for Leben to maneuver around on. Instead, I got two  extra-wide 3" thick self-inflating air mattresses that will fit just perfectly inside the three-person tent, and will allow me to leave a gap between the two so that the dogs fall into the 3" crevasse as they attempt to expropriate my mattress from me. We'll see. 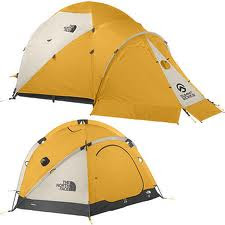 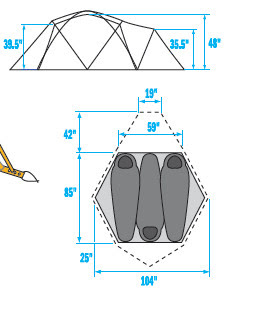 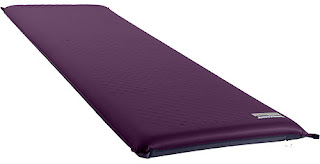