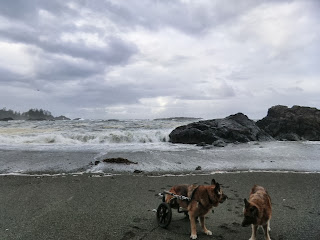 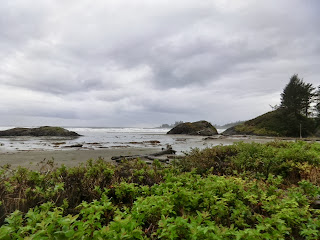 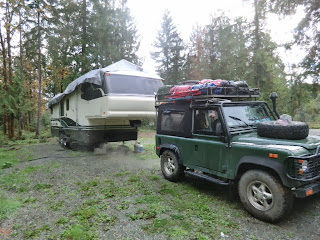 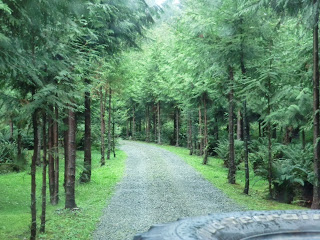 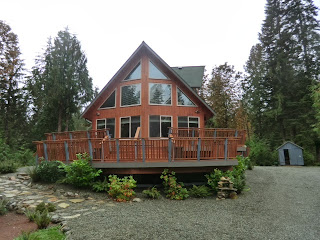 as much as we hated to leave the yurt camp, the road beckoned, so we packed up and left. what a great respite this place was, albeit a little bit out of stride for us. After a few quality minutes in the nearby quaint little village of Ucluelet sampling the great coffee and even greater baked goods at The Bakery Coffee Shop, and then buying some wild blackberry wine, we drove the 20 miles or so along the Pacific Rim Park road, occasionally stopping despite the rain to take in the breathtaking shoreline views of the ocean. After a brief stop in Torfino, the little community at the other end of Long Beach, we headed back to Route 4 to head to Port Alberni, an hour or so away.

When i was at Cape Scott, there was another couple there, Les and Sue Strachan of Port Alberni. they kindly extended an open invitation to us to spend a night with them, but i was reluctant to take them up on their offer because only the kindest of souls would ever extend such an invitation to someone, and his two dogs, who had been camping out for three fortnights. But i accepted their offer after they offered their small, unheated cabin for the night. after driving through the paradise that they call their driveway, i discovered that they lived on what can only be described as a multi-acre ecological system that they had painstakingly and lovingly created themselves over almost 20 years, salmon-filled ponds, streams, trees, rocks, walks, and other settings i have no vocabulary to describe. I asked Les to send me something to describe their paradise as i cannot do it justice, and will post it on my blog when he does. their next plan includes building several low-budget cabins and to open a getaway for nature-loving, adventure-seeking souls who wish to escape the comfort of their urban lives and live with nature for a while. I will be the first to sign up when they do, once i figure out how to get there and back quickly.

Les showed me the sparse, basic cabin he had offered to me for the night, which was just fine for us, but then took me to his fifth-wheeler for the night. it wasn't the step up in luxury that bothered me, but the steep five steps into the mobile lodge that i had to get Leben into and out. We managed, though, albeit with some difficulty, and had a pleasant night's sleep after a wonderful dinner and story-telling in their wonderful home in this magnificent paradise they created themselves.

Tuesday, after i talk with a local reporter who wants to do a story about us, we head to a camp near Parksville back on the main highway so i can spend a few more hours on Wednesday with Nicholas and Kyra and Ruby and Michelle, I hope. then it's off to Victoria, then Port Angelis and the somehow home, 3000 mikes away.

photos
- Leben and Erde on the Pacific
- View from Pacific Rim Park
- the Defender in front of our home for the night. i was tempted to tow it away.
- the driveway to the Strachans' home
- their home. it and 10 acres are for sale for much less than i paid for me tent-size condo. city life destroys our minds, bodies, souls and wallets, too