The is a late posting for last Sunday. I need to add more to this posting some future time, but I thought at least I'd tell you about that bizarre incident I said occurred Sunday morning at Moon Lake.
When I got to Moon Lake, an isolated park located 40 miles in each direction from the nearest person, about 6pm,the park was empty, although over the next several hours two RVs pulled in to the far right of me.  I chose the best site for me in the park, right across from the small beach, which gave us an unobstructed view of the calm lake.  After all, I reasoned, the temperature is in the 50's, the water colder, and who in their right mind would go swimming at all, not to mention at night?  The soft rain during the night induced a deep sleep better than St. Ambien ever could offer, so I slept like a dog (between two dogs) until I woke up at 5:00 and noticed that the rain had recently stopped.  Just after that, I heard a car door to my left shut. Odd, I thought, because there were no campers in that direction.  Then, I heard the loud giggling and rapid chatter of some young girls, perhaps three of them.  After five minutes, I shouted at them to keep their voices down, but after stopping for 10 seconds, they continued their play, or whatever it was.  I blew my whistle, but they ignored that, too. I should have played some Wagner and that would have done the trick.  Then, the whole group jumped into the frigid water and for the next 10 minutes disrupted my sleep with their boisterous play.  I gave up trying to quiet them.  All this time, the supervising adult spoke something that I was not able to understand to them or perhaps no one  in a soft, monotone, raspy voice.  After 10 minutes of this, the group emerged from the cold water and got into the car.  A door slammed shut, the engine started, and the vehicle exited the park. Odd.  Very odd. If we were on highway 16 instead of highway 1  I bet they would not have done that.
Here's a photo of our lovely campsite, until 5:00 a.m. Sunday, that is. 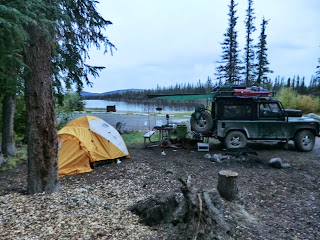