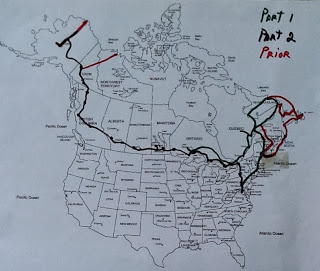 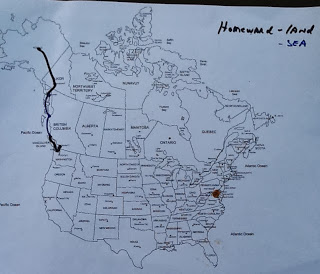 After 7,250 miles of traveling and camping out every night, experiencing some of the world's most splendid natural creations, meeting incredibly good people (with one notable exception), encountering and then solving the unpredictable and inevitable problems that crop up on these trips, as we drive out of Denali Park the Outward Bound leg of this journey, part 2 of our "frigid sea to frigid sea journey" has come to and end. And what a journey it was! It was my, I mean Leben and Erde's, journey, but I must say that even I am impressed. Cold, but impressed nonetheless. I have found no evidence that anyone else has ever made this journey, especially as we did it. At least no one in his or her right mind.

The track of our journey since August 15 is shown below (top) in black. Part 1 of this journey is shown in green. The "been there, done that" pieces are shown in red, i.e. the Dalton Highway (to Prudhoe Bay, Alaska) and Dempster Highway (to Inuvik, Northwest Territory, Canada) pieces in the northwest in 2001 and the Newfoundland, Nova Scotia and Prince Edward Island, etc. pieces in 2002. Homeward portions of prior trips are not included.

The perceptive among my readers are probably saying, "But, Ed, you still have to get home," and you would be right. This journey isn't over until the four of us, Leben, Erde, the Defender, and I are all safely back home. If the past is prologue, the return trip promises to be as exciting as the outward bound portion, if not more so, so continue to check in here for updates. The bottom map shows the only portion of the homeward bound trip currently planned so far: the black line shows the three-day drive we have ahead of us from Denali to Skagway, where we have to catch the ferry by 2:30 a.m. September 19th. The blue line shows the four-day journey by sea, first from Skagway to Prince Rupert BC,and then from there to Port Hardy on Vancouver Island BC. I have no idea at this time where we will go from there to reach our destination, Washington, DC, the orange dot on the other side of the continent. If any reader of this blog would like to guess the route we will take, draw a map with your guess and send it to ed.otr6@gmail.com along with photos of two box tops from any large box of instant white rice (which turned out to be Leben and Erde's favorite food on this trip) and the person who comes closest will be eligible for a prize yet to be determined. Entries must be postmarked by September 23 to be eligible. (It would be appreciated if you would send the rice by USPS, etc. later.)