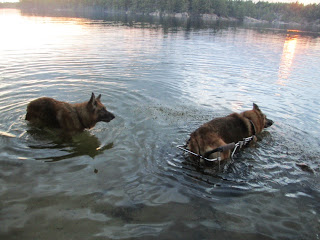 I never ceased to be amazed that on these trips I can plan a 300 or 400 mile drive, estimate the time I will arrive, and the pull into camp at that precise time. Today was another such day. When I left Mongaup Camp at 9:30, I calculated that I would arrive at Charleston Lake Camp in Ontario at 500 p.m., and I pulled in at 5:02. I DC, I have to give myself an hour leeway just to drive 12 miles to the Beltway, a 15 minute drive with no traffic.

After I left Mongaup, I had a cup of coffee at the Robin Hood Diner in Livingston Manor. My brother told me that my mother used to stop there for coffee when she visited me at scout camp nearby. I then stopped at a local hardware store to pick up something to make up for the tent takes i left behind. Sure enough, I got exactly what I needed, some large 8 inch nails that work better than the stakes. One of the things I enjoy about these trips is stopping in hardware or general stores like that. They are no bigger than a 7-11, but you can solve any home project or problem with what they have in the store and a little creativity. Who needs Home Depot or Loews when you have a local hardware store that requires you to think and show some creativity?

I was wrong about their going to interrogate me at the border, maybe even water board me. As it turns out, I lucked out with a very nice female border agent who asked a few questions and then waved me through with, Have a safe trip. I hope I have the same luck at the next five crossings.

As I was packing the Defender-90, one of the items on the Wild Card table of maybe-takes was a pair of rubber boots, which I bought for my trip in 2000 but never took them or wore them except he i take Leben swimming. Franklin, the young man who help me load my truck told me to take them just in case. As it turns out, when we arrived at the camp tonight, I took the dogs to the pet beach just to see how they reacted since thy had been here last year. Well, once thy saw the water, their collective memories triggered and the two of them, Leben in his cart, ran own a steep incline to get into the water. I tied to hold Leben back but he was too strong and determined to get into tat water. He ran straight for the water and dove in off a 8 inch drop, toppling over in the process. He looked up at me as if to say, hey, got me out kf this predicament, and i did. Once he was upright, he waded out a few more feet and he and his sister had the time of their lives playing like I have not seen in a long time. (See photo.) But as he tried to turn around in the 18 inch water, he got mired in the sand and I had to wade in and winch him out. If nothing else of interest happens on this trip, seeing Leben enjoy life exactly as he did before was enough to compensate for the burdens of this trip. A woman who saw this said that he doesn't know he's paralyzed. After seeing this today, how can I ever think of him as paralyzed again? Of course, I am paying the penalty for this with two wet dogs sleeping next to me, but I am sure they often pay the penalty for my rash decisions too.

Hi Ed,
It's good to see the dogs enjoying themselves. Also good to hear that they let you sleep on the air mattress with them.