Humbling.  Humbling is the only word I can think of. As I drove into Banff National Park today, I felt humbled in the presence of the awe inspiring spires of the Canadian Rockies.  The 2000 mile trek across the wide open, scene-less  plains was worth it for the one hour drive to our camp.  At first we traded the modest churches of the little towns in Ontario for the tall cathedrals of  grain elevators of the plains.  Now we have traded the latter for the soaring spires of the Rockies.  I feel reinvigorated already, and I didn't think I needed to.  And the best is yet to come, 2000 miles away.
We arrived at Lake Louise only to find the camp full.  But that was the good news.  I was directed to this remote camp 50 miles away where we spent a quiet evening in a great camp site.  Erde had lots of room to chase the ball and Leben had an orchestra seat on all the goings on in the neighborhood.  As we drove into the camp, Leben shot  up and put his head out the window, a sign that this is something special.  Erde, on the other hand, started barking for me to throw the ball for her as I was trying to set up camp, so she was relegated to the jail until the camp was set up.
When are arrived at camp, I noticed that I only had gas for another 8 miles when the closest gas station is 50 miles away, so I had to dip into my 5 gallon supply from my roof rack. Another one of those No Big Deals.
Instead of packing up and moving on to Jasper tomorrow, I decided to stay put here for another day and restock supplies, put in the windows in the Defender, and give the dogs and the Defender a break.  Maybe I'll even have time to read a page or two of my book.  We stay on schedule we will have a long drive Friday, but the tradeoff will be worth it.
I put away the 3-season tent and started to use the new Northface Tent as it is better equipped for the cold we are about to enter. It is a little but cramped, but cozy.  I have to figure out a way to get Leben in and out as the doors are not very high.  The tent is beginning to acquire tat distinctive dog-smell, but the dogs are probably thinking the same, but about me.
Tomorrow we will visit Lake Louise, where Leben and Erde had visited as pups. One thing I noticed when I stopped by the information desk on the way in was the number of Chinese visitors.  In 2001, when we were last here, there were none.  Now they seem to be the majority.  I understand they are buying up homes in Vancouver Island, and so this is probably their preferred vacation spot.
Some photos...
Entering Banff,  Erde in jail while I set up the camp, the dogs relaxing at their Banff campsite. 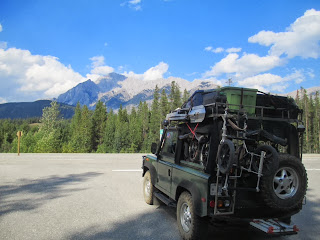 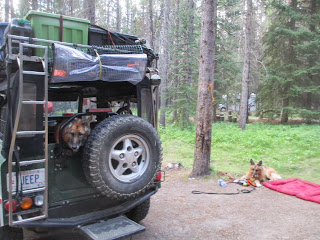 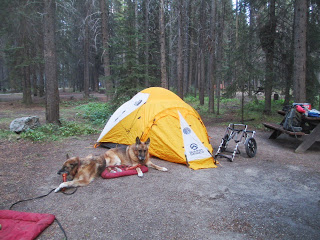