I am losing track of what day of the week it is, what the date is, what day of our journey it is, and where I stayed.  We are moving on every day and the past days are all blurring togethe
We left Champlain Provincial Park hurriedly after I waited for some water hog to finish her shower, but she went on for 30 minutes, so I left without a shower. Apparently, one one shower room at a time at this place works.  Why do people like that even bother to go not the woods. Part of the lure of the road is that no one cares if you haven't showed in a week or month.
My hope was to get to Killarney Provincial Park and snag one of the few unreservable sites, but that was not to be.  Killarney is the jewel of the Ontario Provincial Park system and heavily booked. I got a great site last year because I went in October.  I was hoping to get there by 2pm, but I got distracted and took a wrong turn, which I did not discover for 20 miles since there are few route markers, and the towns are 29 miles apart.  When I discovered my mistake, I turned around, but 4 miles up the road I realized that that thing in the road I near,y ran over might have been a turtle.  So I turned around again, drove 2 miles to the thing, and sure enough, it was a big turtle, still alive, sun bathing in the middle of the road.  I picked the protesting creature up, and set him or her down in the marshland off the side of the road, and sped on to Killarney, which sits 25 miles off the man highway.
Sure enough, the camp was full.  They had just given away the last site minutes before I came.  Had I not taken that wrong turn, I would have made it in time for the last site.  But had i not taken that wrong turn, the poor turtle would be dead, so I feel great that I took the wrong turn and lost that Killarney site.
On the way to Killarney, we stopped (we take a 20 minute break every three hours, after which the dogs get to switch places in the Defender) at the same great spot we stopped in last year.  I do not need to tell you that both dogs took advantage of the lake, Leben once again in his wheelchair. Not far beyond that, we stopped in the same cafe as last year for the dogs's daily bonus for tolerating the long rides in the Defender, an ice cream treat.  It was moving on from there that I made my wrong turn, trying to rely on memory from last year.
The staff at Killarney told me that the nearby town of Killarney had some great sites left, so we drove 5 miles down to road to check it out.  I do not consider an open field with no shade, filled with trailers, overlooking a small water outlet a great site, so I pulled out my contingency plan for the day with back up camps,  and drove 2 hours further to a great little Provincial Park called Fairbank, some 20 miles north of the main highway (17)' east of Sudbury.   Staying here will save us almost 2 hours of driving tomorrow.
On the drive to Fairbank, I noticed that leben was developing a serious rash under his arm, so I had to treat that as soon as I to in the camp.
On the way up to the park, the road was poorly marked and we passed our turnoff.  Fortunately, the rule I use is that if I have gone further up a road than I thought I would have to, I stop and flag down locals, which is what I did, s that wrong turn only cost me  ten minutes.
Tomorrow we head to Lake Superior and either Pancake Bay Provincial Park or Agawa Bay Provincial Park. We stayed in both places before.  They are right in the shore.  Perhaps we'll see if Leben wishes to dip his paws in this water. 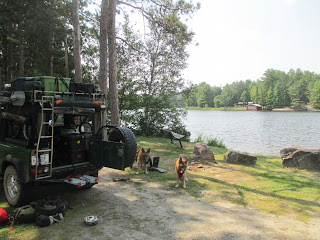