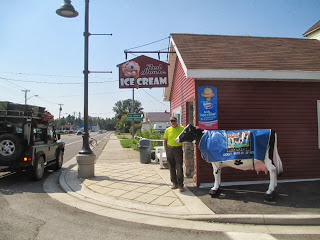 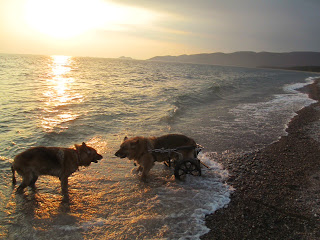 After gas and grocery stores, the most frequent stops I make are for places like this for you know what for Leben and Erde. I had no intention of having my photo taken like this, but as i waited to take a photo, some local gentleman lingered at the ice cream stand peppering me with questions about my rig, my journey, and the dogs. Since I was anxious to get a photo without anyone in it and was anxious to move on, I asked him to take my photo, and he did. Once he did, I thanked him, jumped into the Defender, and moved on.

We drive about 250 miles today. We made such great time, I bypassed Pancake Bay Provincial Park, where we stayed last year, and reached Agawa. Bay Provincial Park by 5:30. We stayed here two years ago on our return trip home. What a great park, right on the beach. The bottom photo is of Leben and Erde dipping their paws into Lake Superior, or in Erde's case, her whole self.

As we turn north today along Lake Superior, we left behind any semblance of traffic and civilization as I knew it in DC. From here on out, the road is wide open and miles do no mean the same thing as they do to those of us who live in the cities.


Tomorrow, I will be trying to get up to Pukawaska National Park, 200 miles north. It was there last year when Leben became paralyzed. But now that he has done just about everything he did before, I no longer think of him as paralyzed, just as my dog.