The one packing chore for these long road trips I hate the most is my wardrobe.  Because of that, I save it for last for fear  that the trip would never get off the ground if I started earlier.  The problem is that I have limited space but I have  to be prepared for 60 days of travel, three seasons (summer, fall and winter), and whatever unplanned social events pop up,  and I do not want to have to spend every day doing the laundry or have to buy things along the way to make up for things left behind. (Left behind on purpose; I have never left anything behind by forgetting.)   But with each trip, a new problem arises that complicates packing.  After each trip, as I buy  new things to make up for the deficiencies  of the old things, I keep thinking I have to take along the old things in case the new things don't work out.  So, I pull out everything I would want to take under the best of circumstances (except my  suits, dress shirts and ties, which these days are used for funerals or going to the Supreme Court, and tuxedo) and then start packing.  Only then do i take out my To-Take list to see if everything is accounted for.  After my wardrobe bag is loaded, I see how big it is.  If it is too big, I start jettisoning things one by one. I then close up the bag, stash it by my front door,  assume that everything I will need is in it, and move on.  But if I was hesitant about jettisoning something, but did, I put it on my "Maybe" table by the front door and reserve the right to toss it in the bag as I walk out the door.  One item or another always makes that wild card cut. Right now, everything is on my bed and I am about to go through the process of packing and eliminating right now.

As I predicted, as i started to unload things from my closets and pulled out my bags, the dogs knew that something was up, so both followed me into the bedroom.  Leben really did not follow me, but willingly came when I "slung" him (my term for transporting him from room to room, wherever I am).  I always wonder what they are thinking when this happens: "Great, we're going for a ride."  Or maybe, "I hope he doesn't forget to take us."  Or perhaps, "Ah, crap, here we go again, off on some lousy trip to the woods."

Speaking of Leben following me around, at night I sling him to his bed, not far from my own bed, where he has slept for the last 12 years. Starting about two months ago, sometime during the night, he pulls himself off the bed onto the floor, where I usually find him in the morning, right under my feet as I pull my own self out of bed.  Sometimes I find his sister, Erde, in his vacated bed. This morning when I woke up, as predicted, he was not in his bed.  But he was not on the floor either.  I looked in the master bathroom and the rest of the bedroom, but  he was not there either.  More puzzled than frantic, I searched the hallway, but no Leben.  I checked out the nearby study, but he was there either.  Not in the second barroom either, or the next-in-line foyer. As I approached the living room,  there he was on his bed in the middle of the living, resting comfortably.  At first I thought St. Francis finally had come  through with a miracle and  gave him back his legs, but that was not to be. As it turns out, he had dragged himself almost 60 feet, aground four 90-degree corners to get to his bed in the living room.  The only explanation I can think of was that he had had an accident in his bed (no big deal, these things happen) and he either wanted to get away from it as far as he could or perhaps wanted me to think that Erde did it.  (Erde, bless her heart, whenever she is about  to have an accident, she steps into the walk-in shower I had built for her and does it there.)

I procrastinate.  I need to finish packing, and sit down at my desk for eight hours for some paperwork, including redoing my will, which for some bizarre reason i will never understand, I only revise before I take a trip like this. Then i will be done and ready to go, I hope. 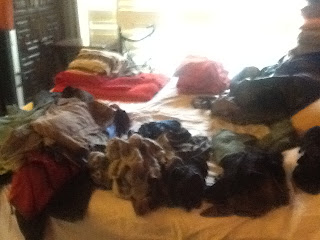