6:10 Reveille.  Erde had a terrible heavy-breathing incident last night.  She has had this since she developed pancreatic insufficiency back in 2003 but last night's was especially heavy.  There was nothing i could do but hold her.  Afetr 30 minutes she recovered and slept like a log, or a dog, as thr case may be.
We missed the storm last night.  I was prepared for it, but I am gklad it paased.  Looks like another beautiful day today.
10:35 Ready to move on.  After showering in the best shower facilities so far, I was driving out of the park when i realized I did not have my wallet.  I waste 20 minutes trying to find it.  as it turns out, it had fallen from the tray on the dashboard for stuff I need on the road onto the hidden perch behind my steering wheel, which I did not know existed until now.  A perfect illustration of making sure things have one place.  My wallet's place is in my pants pocket, and that's where it shall remain.  Fortunately, i have only essential things in there and copies of everything and extra credit cards, cash, etc. in my sfae deposit box, if I can only remember where I out that.
12:30 Gas up in Winnipeg.  Temperature already 32c, or 90f. sun is pounding down on us.  I have to move quickly to stay ahead of the sun, which is hard to since since the sun travel 1500 km an hour and I can only do 105. When the sun hits the dog in the front seat, I have to drive with my right had on some kind of shield over his/her face despite the powerful AC cooling their faces.
another terrible drive.  straight roads, desolate landscape, hot, occasional sandstorms.  three more days of this till we get past Calgary.
A rare thought.  I have been on the road for 11 days, longer than the Appollo 11 moon astronauts, who had more room than we do in the Defender and tent.  and when they went outside for a break, they had a lot more space to walk around in.
1:25. Three-hour break.  Nice little oasis compared to the road.  Had to keep Erde on a leash near the water, a fast moving portage.  She has a terrible habit of running right away for the water.  If she did this time before I leashed her, that surely would have solved her tumor problem, but no more Erde.
3:15 Stopped for daily ice cream for the dogs at a MacDonald's.  It did nit sit well with Erde. You get the picture.  No more MacDonalds for us.  In fact, if you eat at MacDonalds, just imagine what you are doing to your own health if Erde cannot stomach their ice cream.
3:35. Problem with the Defender.  I cannot get it over 65mph (97kph) even on a straight road no matter how far down I push the gas pedal.  As it turns out, the landscape is so straight and deceptive,  I did not realize that we were actually going up a steep hill.  Problem solved.
3:50 Heading north to Riding Mountain Park. Landscape changes dramatically, green, hills, turns in road, lakes. What a respite.
4:30 Enter park.  Wow.  What an oasis.  Given three choices to camp. I chose Lake Audy, the most remote site on a lake.
5:25.  Going down the long dirt road to Audy, we had to stop for a black bear.  Cute little guy.  Looked like he was having fun eating everything in sight next to the road, berries, grass.  But not people or dogs.
5:40 First a bear crossing (they cross wherever they wish), now a bison crossing. Darn bison have no respect for my time.  Leben and Erde bolted right up and looked with amazement at  these strange creatures. I did too as I had never seen a bison either.  Big guys. I sure would not want to run into them at night.
5:50 arrive campsite. Wow, what an idyllic setting, on a quiet lake, no services (drinkable water, either...no big deal, I carry 4 gallons in a jerry can on my roof rack).  Only two or three other campers.  I took site 11. best site in the place for me. Erde hit the water as soon as she found an opening in the grass and opportunity of my being distracted.
Jeff Braun took a rare photo of the three of us, but when he went to tahe the second shot, the battery died.  No bid deal, I carry an extra camera for just this case, and rechargers, batteries, etc.  His lovely 5-year old daughter picked a beautiful pink flower and gave it to me, for what I was doing for Leben and Erde. she should have given it to them.
Hosts came by and warned us about bears in the ares, especially two sows with cubs.  (Erde loves bears; Leben is is indifferent.)  Also, lynx (they can be very mean), and wolves, who like the nearby bison. Fun night ahead. I will sleep with my whistle, metal cups, bear spray, and hatchet, just in case.
took the dogs swimming again.  and once again, Leben got stuck in his wheelchair and had to be winched out of the water.
9:30 In tent.
10:00 Taps. Dogs already sleeping soundly.  Maybe their snoring will keep the bears away.
Tomorrow we head towards Regina as far and fast as we can get.  I will stay at KOAs or other RV sites near the highway to make time.  Sometime tomorrow we will pass the half way point to Alaska, 300 miles.
ed
Reare photo of the three of us.  Photo by Jeff Braun 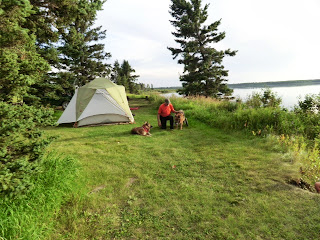 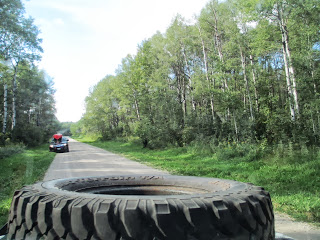 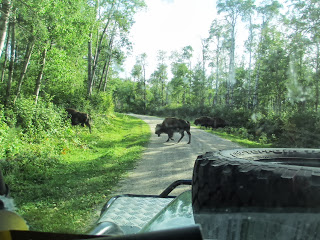 What the hell is that?  Leben and Erde watching their first bison. 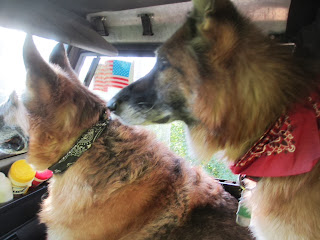